Born in a council house in Pinehurst, Swindon my parents fought hard to get me into Commonweal as it was quite a distance away. I took my GCSE’s and went to New College. After leaving with my A-Level’s I decided to join a mobile phone shop as a Sales Assistant and did my NVQ Level 2 and 3 instead of going to University as I was living with my girlfriend (now wife) at the age of 18. I worked hard and did most roles in the company before taking over as M.D in 2010, aged 30.  I won Wiltshire Business Person of the Year in 2011 and 2012 and I managed to complete a management buy-out in 2013 and set about making Excalibur a purely B2B one stop shop for IT, Landlines and mobiles for businesses, schools and charities.  We had incredible growth and became a Times Top 100 Employer and in 2018 I sold the business to the management team and created a £1m pot for the team as a thank you. I have bought and sold and invested in various businesses from all different sectors and mentor many businesses owners now on how to treat their team well, have ethical business practices in order to grow.

My real passion is in helping people; I co-founded the Younite Foundation in 2016 for young people in Wiltshire and Kenya, am a Trustee for Wiltshire Air Ambulance and the Wiltshire Community Foundation, Ambassador for Jessie May and Swindon Night Shelter and Patron for Swindon 105.5.  I spent many years recently negotiating the purchase of the County Ground for the STFC Supporters Trust and am a Non-Exec Director for the Swindon Wildcats and now spend most of my time helping charities and community groups when not being busy being a father and husband. I have managed to travel the world, been invited to 10 Downing St, Buckingham Palace and met people I never dreamed of meeting.

Although my destiny was never to be an A* student, Commonweal gave me a love for learning, a want to push myself and I met my wife there so the memories for me are incredibly special.  The support I had from Mr Stubbs (Tutor) and Mr Salt (Headmaster) was incredible and I tried to repay that faith and support shown to me in the years since in all that I have done. Thank you. 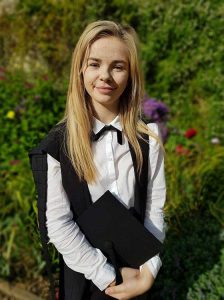 Ruth did some legal work experience and explored the subject and decided that it was something that really interested her.  She only started thinking about Oxford at the end of year 12 after she had been there for an open day.  Ruth never thought that she would get in but figured it was only one of her 5 UCAS choices and so it didn’t matter too much. However, very happily, Ruth got an interview and then was offered a place at New College to study Law.